The Horse In Regency Novels 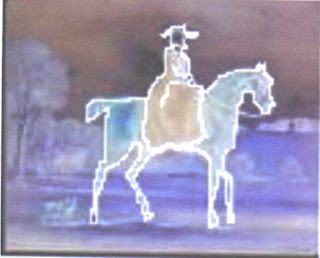 I love reading historical novels, but many a good one is spoilt for me by inaccurate descriptions of horses and their housing, care etcetera. Here are a few helpful pointers from my Regency author’s guide to the horse.

This can be divided into size, sex, breed, type, colour and age. A full description of a horse for sale would include all of these, whereas an author may only wish to mention colour and sex or type. An understanding of some of the correct terms will facilitate an author’s ability to portray a scene as accurately for the reader as she sees it in her mind’s eye.

* For example: The groom was leading a sixteen hands dapple-grey gelding.

A horse is measured in hands, as originally the height was determined by the number of hand widths from the ground to the withers (the top of the shoulder, where the neck meets the back). A hand equals four inches (ten centimetres), roughly the width of a man’s hand. If the animal being measured stands above a level number of hands without reaching a further span of four inches, then the height is completed in inches, thus:

The bay mare stood at fifteen hands and three inches, or fifteen-three.
The squire’s black stallion is sixteen-one hands.

If the animal stands at more than fourteen hands, two inches (14.2 hands high), then he is a horse. Below and including this measurement, he is a pony.

Horses can be aged by changes in their teeth, but it is not an exact science, particularly as they grow older.

There are dozens of horse and pony breeds throughout the world, but as far as the Regency (1811 - 1820) and its extended genre period from the late 1700s to 1830 are concerned, only those of the British Isles or imported at the time are relevant. Some of these are:

Thoroughbred ~ The modern racehorse, developed during the seventeenth and eighteenth centuries. The General Stud Book was first published in 1808.

Arab ~ Fast, fleet, nimble and hardy. Imported to improve many breeds, including the thoroughbred.

Heavy Horses ~ Such as the Shire, descended from the medieval warhorse known as the Great Horse; the Irish Draught, developed from indigenous stock through imported French and Flemish horses around 1172, when the Normans landed in the Emerald Isle; the Suffolk Punch, descended from a single stallion, Horse of Ufford, foaled 1768; and the Percheron, from Le Perche in Normandy, a versatile breed used as a warhorse as well as for farm work, for driving and heavy artillery. No doubt similar horses came to this country with the Normans under William the Conqueror.

Carriage Horses ~ For example the Yorkshire Coach Horse, the Cleveland Bay and the Hackney, the latter developed from trotting breeds such as the Norfolk Roadster and Yorkshire Roadster. Prior to 1833, when the Hackney Horse Society was formed, the Hackney was a type (see below).

Hunter ~ Any horse or pony used to ride to hounds. Build can vary depending on country over which the owner hunts. A quality hunter was a top class riding horse as he is today. He must be balanced, sound and well proportioned, have easy paces and be both mannerly and comfortable to ride.

Cob ~ The Welsh Cob is a breed, section D of the modern Stud Book, which dates from 1830. Generally, a cob is a type – any small horse, stocky in build with a sensible, honest head and ‘the bottom of a cook’. He should be steady, unflappable and mannerly, the gentleman’s gentleman of the equine world. Prior to 1848, when it became illegal, cobs were traditionally docked.

Hack ~ Covert Hack, a showy thoroughbred which carried its owner to the meet, where the groom would have already taken the hunter at a gentle pace. For the lady or gentleman riding in the refined atmosphere of London’s parks, however, the Park Hack was required, a beautifully schooled and elegant mount with great presence, lightness and freedom in movement.

Warhorse ~ Swift, thoroughbred type for the Intelligence and Dispatch riders; quality matched with substance, courage and endurance for the light cavalry – the dragoons who were mounted foot soldiers; larger, heavier and therefore slower animals for the heavy cavalry who were required to carry heavy weapons and fascines, bundles of sticks used for various purposes and essential to eighteenth and nineteenth century warfare.

Horses come in various colours, not just brown, black and white. In fact horses are never termed white. They can be any of several types of grey. They can be light or dark coated in bay or chestnut shades, as well as other variations, for example liver chestnut. If writing an English historical novel, be aware of subtle differences in description between the United Kingdom and America. For example, in Britain a black and white patched horse is a piebald. In the United States, the same horse would be a pinto. Traditionally, any other colour patches with white is termed skewbald. Roan horses have chestnut, bay or black hairs intermingled with white and are referred to as strawberry, bay or blue roan respectively.

Markings are usually composed of white areas on either the head or legs. A horse might have a blaze, a stripe, a star or a snip on his face; stockings (to the knee) or socks (a little above fetlock) on his legs, and white heels.


Two examples of how to describe a horse in a Regency novel:


* Lady Henrietta Childs was riding a spirited chestnut mare, rising sixteen hands and one inch, with neat ears and a dainty head. She carried herself with a lively presence and possessed a good depth of girth, well-sprung ribs and a fine sloping shoulder.


** Here is an excerpt from A Sense of the Ridiculous, describing Grey Friar:

Her groom was holding her horse ready while a stable boy held another. She handed her dapple-grey gelding a carrot, and while he crunched, his bit jingling, she pulled on her gloves and looked him over with a knowledgeable and critical eye. Standing sixteen hands high, his two-tone coat was accentuated by a striking snow-white mane and tail, while the proud bearing of his arched neck and his powerful hindquarters displayed the rippling muscles of an athlete. Quality and presence oozed from every pore; a commoner he was not, and he knew it.
Posted by Heather King Author at 04:18