I called this blog A Regency Reticule because I intended for it to contain a ‘pocket’ of Regency information and tales. Having a lifelong passion for horses, I have enjoyed my excursions into the world of the Georgian horse, particularly the putting together of a work entitled The Horse: A Regency Author’s Guide, which is yet to be published. However, for this post I thought it about time I featured reticules themselves.

When the high-waisted muslin and silk empire gown became fashionable, a need arose for an article in which a lady might carry any of the following: smelling-salts, lavender-water, some pin money, gloves, her fan, a handkerchief, her dance card and a pencil.

The reticule or ‘ridicule’ (so dubbed by the satirical press) therefore became that essential addition to a lady’s wardrobe, although ‘knotting bags’ had been carried in the latter decades of the eighteenth century, to all intents and purposes to hold the items required for a pastime considered de rigueur, yet clearly calculated to proclaim a lady’s needlecraft. Many ladies fashioned their own reticules, which were generally drawstring bags, decorating them with either embroidery or patterns composed of miniscule metal or glass beads, although some were created from lacquered or painted tin or even cardboard.

Designs were as varied as the personalities who conceived them. Some consisted of intricately worked depictions of garden flowers and leaves; others achieved stunning effects with a single flower in full bloom upon a dark background. Silk was invariably the fabric of choice of the beau monde, with velvet becoming ever more fashionable around the beginning of the Regency proper, from about 1810. Both types were artistically adorned with spangles, tassels and/or an exquisitely embroidered border around the neck. They came in various shapes: rectangular, oval, that of a lozenge or, more classically, a Grecian urn. During the wars with France, reticules even appeared in a style similar to the ‘sabretache’ (a type of satchel) used by cavalry officers. The ladies’ fashionable magazines featured patterns which were eagerly anticipated by those with a desire to be à la mode, while ready-made metal frames also became available, providing an excuse for further embellishment. A lady might create a reticule to match her gown, her cloak or spencer, her shoes and on occasion, her gloves. 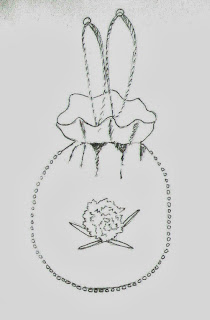 
Reticules were even used to make a political statement. During the 1820s, The Ladies’ Society for the Relief of Negro Slaves was responsible for the issue of indispensables made of silk, while The Female Society of British Negro Slaves in Birmingham produced literature which was inserted into workbags sewn from cotton, satin and silk for sale at markets and rallies. 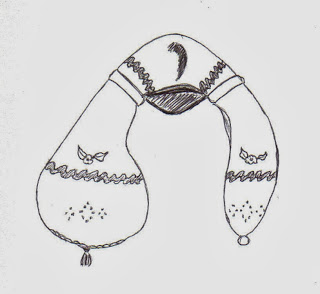 
For the purposes of carrying money, some ladies preferred the practicality of a stocking purse. This was a sausage-shaped bag with the opening in the middle, whereby coins could be slipped into either end. Two metal rings positioned on each side of the opening could then be pushed along the fabric to fasten one or both pouches. Ladies frequently made their own to suit their requirements, usually netting, knitting or crocheting the purse and decorating the ends as fancy or fashion decreed. Nevertheless, for those less dextrous and with the wherewithal to do so, such items could be purchased in milliners‘ shops, as well as establishments like Minster Yard in York and Bedford House in London.

Posted by Heather King Author at 07:14