Stabling In The Nineteenth Century


There seems to be some confusion over the type of stable to be found during the Georgian and Regency eras, so I thought I would post about it.

In the country house of the eighteenth and nineteenth centuries, the stable yard was a busy and important part of a gentleman’s establishment. When the family was in residence, horses would be required at all times of the day, for pleasure rides, carriage journeys, sending messages etc. In the country, the stables were always so termed. It was in town that they were named ‘mews’, where they were often located behind the house, adjoining a narrow lane and overlooking a similar equine housing on the opposite side, which in its turn belonged to the house on the next road.

In grand establishments, such as Blenheim Palace, Chatsworth and Badminton, the stables were positioned around large courtyards, allowing plenty of space for a carriage and four to manoeuvre. In the ‘good old days’, when they were cobbled, it meant a deal of hard sweeping for the stable boys in order to keep the yard clean and tidy. A tall archway, frequently topped by a clock tower, provided ingress and egress, as well as acting as a statement of the owner’s rank and worth. In these noble mansions, stable blocks were two-storey, featuring stabling on the ground floor, with haylofts and grooms’ accommodation above. Harness rooms were set within the stables for convenience, along with washing areas. One side of the quadrangle was occupied by the coach-house. Many a smaller country house also had this arrangement. 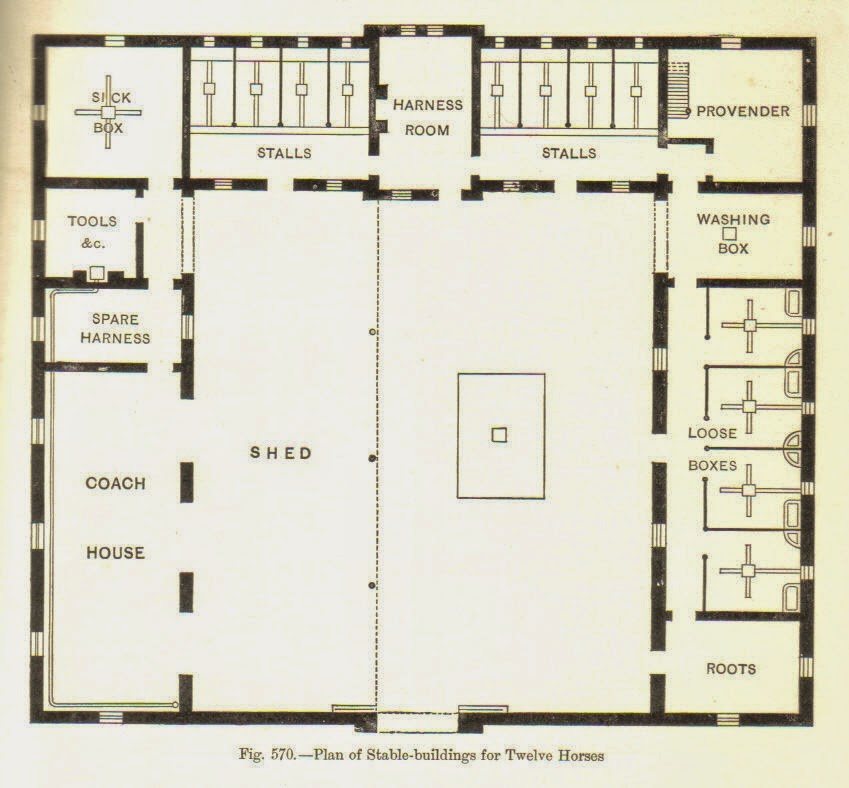 ﻿
Sadly, the costs of maintaining these ducal residences has meant most stable blocks have been converted to garages or other, financial concerns, such as restaurants and visitor centres. At Badminton House, seat of the Duke of Beaufort and home of the world-famous Badminton Horse Trials, happily the palatial equine quarters are still maintained for their original purpose. Within the long, honey-coloured stone building, set with windows and a central doorway, are a long line of dark timber loose boxes. Each is fronted by a grille above solid planking, to avoid inmates interfering with anybody ‒ horse or human ‒ as they walk past and a carved knob atop each separating partition.

Such expansive accommodation, however, was not the norm. Even in Victorian times, my aunt tells me, loose boxes were not common. In the majority of houses, horses were kept in stalls, although I suspect that at some point during the nineteenth century it became fashionable to convert stalls into loose boxes. Indeed, this belief is borne out by Giles Worsley in an article for Country Life about Houghton Hall in Norfolk. He states that the stables at Houghton, in common with ‘all country-house stables’ had been altered with the addition of loose boxes in the nineteenth century. He goes on to say that in many stable yards the original fittings were also replaced in that timescale, but a number survive at Houghton, where the stables are still used for horses.


Sir Robert Walpole, Prime Minister during the 1730s, improved Houghton for political reasons and entertained friends and supporters right royally in the beautiful house and park he created. The current stables were the second quadrangle to be built after the original was demolished, being deemed to be in the wrong position after only thirteen years. They were erected to house eighty animals; hunters, carriage horses and cart-horses. Constructed of the local, coarse yellow Snettisham stone, with brick to the interior of the courtyard, there were varying degrees of opulence for the occupants. In order to display his wealth and quality horseflesh, Sir Robert stalled his hunters in palatial surroundings in the north-eastern block. Dark timber partitions or stall-divisions, finished with alternate columns (each topped with a ball) and stone pillars (leading to the vaulted brickwork overhead), separate each bay and the floor is laid with pinkish-red and blue-grey bricks. Diocletian windows line the wall above the stalls. The original hay racks are composed of twisting uprights and the mangers, also to the front of each stall, have survived unaffected by modernisation. Bridle pegs decorate the walls above the feed bins, with a harness or tack room nearby where the saddles would have been stored. Wooden panelling lines the wall of the tack room, which still has wooden semicircular pegs for bridles and other items of harness.


In the opposite corner of the courtyard, a stable for six horses indicates a lesser degree of comfort. Probably for carriage and coach horses, there is a partition for each pair of animals, as opposed to one between every horse in the hunter stable. Between each pair, hooks survive for the hanging bails which would have been used to separate them. Nevertheless, similar racks and mangers head each double bay. The adjoining block was, in all likelihood, used for the farm horses, since there are no partitions and only a sloping hay rack – the equivalent of travelling economy class!


This arrangement bears out family records, as in one house my grandfather had cow stalls in pairs on one side of a barn and stabling on the other, with another stable for carthorses a short distance away. Both had haylofts above. Frequently, chains were attached to the partitions at the rear of stalls. These could be fastened across behind the horses to prevent them pulling backwards, although often as not they were not put into use, except, perhaps, at night.

It was not unusual, in a less grand establishment, for one stable building to house a loose box at each end and stalls in-between. Some gentlemen’s residences also had a stall(s) or open-ended box for washing down sweaty or dirty horses. Nevertheless, the majority of Regency households would have had mainly stalls with perhaps a stallion box or two and a large loose box for an expectant mare or sick individual. Within the stable courtyard, there would also have been one or more feed rooms and probably a harness room for each block of stabling.

When stabled in a stall, a horse wore a leather headstall to which was attached a rope. This was fed through a ring on the wall or manger and weighted with a ‘log’ – a wooden or metal ball. This contraption, known as a ‘log and rope’, allowed the horse a measure of movement and freedom to lie down, but prevented him from turning around.


Major coach operator William Chaplin famously kept 1800 horses all told, with 200 of them at his underground stables at the Swan With Two Necks on Lad Lane in London. His competitor, Edward Sherman, constructed a large stable complex in the cellars when he rebuilt the Bull and Mouth. With these numbers, they must have been kept in stalls; there would not have been space for loose boxes. Equally, at the thousands of coaching inns across the country, stalls would have been the predominant form of stabling, for ease and convenience if nothing else! In point of fact, writing in 1888, Athol Maudslay was quite scathing on the subject of horse accommodation and care during the coaching age:


“Architects, too, had not thought it worth their while to study stable architecture, or they thought it beneath their dignity to do so, except it were the stables of some great nobleman or a prince of the blood royal, and even in these stables the improvements which now exist were wanting and the sanitary arrangements were very defective. They were ill-lighted, with lowpitched roofs and narrow doorways… As regards the old coaching stables, it is difficult to say of what the old drains were constructed, since in those days there was no iron employed in stable drainage… As for the pavement of these old stables, it is invariably rough pitching, either of pebbles, flint, or Purbeck stone, which is so constructed as to arrest surface drainage, rather than facilitate it. As to the mangers, they were all of wood with old over-head hay-racks and worm-eaten manger-troughs, which, once infected with disease, conveyed it to every horse who fed from the same manger. In place of all this we have now a perfect system of drainage, hard Staffordshire vitrified pavement upon which horses cannot slip, and which is so made that it will not retain water on its surface. We have iron manger-troughs, iron hay-racks, large ventilating windows, and, what is more essential than everything else, width between each stall division, plenty of room behind the horses, and doors of a proper width, through which horses can pass without injury. And then the old yards were vilely paved, and the buildings frequently have neither a claim to architectural pretensions, nor even common sense to plead as an excuse for their erection.”

A ‘good stable should be 18 feet wide inside and each stall should be 6 feet wide,’ says an eminent veterinary surgeon of the late nineteenth century. He recommends that the wall divisions be 9 feet long, allowing a 9 foot wide passage, with 10 feet divisions being preferable. It was considered acceptable for a cart-horse stable to be only 16 feet wide, but the width of stalls had to remain at 6 feet.


Good dimensions for a loose box were 10 x 12 feet, he states; nowadays this would be considered large enough for a pony! A modern hunter would expect a stable of at least 12 x 12 feet, if not 12 x 14, and as of yesteryear, a foaling box was considerably larger – usually around 12 x 16 feet.