During the seventeenth and eighteenth centuries, medieval castles and sprawling manor houses evolved into a more formal residence where gardens were laid out in geometric patterns involving strictly linear paths and clipped hedges. Knot gardens and parterres often fronted the large residence, such as at Wilton House in Wiltshire, which was planned to entertain royalty. At Hanbury Hall in Worcestershire, built at the time of Queen Anne, in 1701, the parterre to the side of the house is still immaculately maintained.

By the extended Regency period, however, the visitor was likely to approach a country house via a long drive, passing between wrought-iron gates guarded by a lodge, where, no doubt, a lodge-keeper would be on hand to proffer a courteous greeting. The equipage, whether travelling coach or chariot, sporting phaeton or curricle, leisurely barouche or landau, or, indeed, the doctor’s homely gig, would then proceed at a brisk trot through an expansive vista of rolling parkland dotted with ancient oak, horse chestnut and beech trees. Between the gnarled branches covered in lichen, a view of a sparkling lake was almost de rigueur, while various follies and perhaps an ice-house would also be glimpsed in secluded positions around the estate. The periphery of this acreage might be enclosed by carefully crafted iron railings, a high brick wall or even a sweeping stone boundary softened by ribbons of ivy and, in shady spots, the feathery touch of mosses.

At Berrington Hall in Herefordshire, the carriageway (now a tarmac drive) for 'guests from London' snakes across the park to a ‘Triumphal Arch’ or gatehouse, whereby the traveller enters the more formal surroundings of neatly tended shrubs and paths. 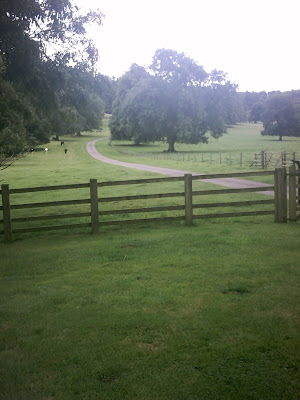 On the other hand, at Witley Court in Worcestershire, the now long-gone approach, built by Lord Foley in the seventeenth century, was an ambitious causeway across the lake (the Front Pool), to bring the visitor to the imposing North Front. A painting by Edward Dayes (1763 – 1804) is possibly the only surviving image of this approach, as represented here by a print produced by William Angus (1752 – 1821) in 1810.

This is how the Front Pool looks today. A path follows the dam, to the left of this picture, allowing visitors to walk up to the North Front. What an imposing sight it must have been for those long-ago guests of Lord Foley, to ride in a carriage to this huge mansion!

The church, seen in the upper photo, adjoins the North Front and West Wing, to the right of the lower picture.

In some of the grander establishments, such as at Stowe House in Buckinghamshire, the main carriage drive passes over a humpback bridge, then to afford the visitor a grand vista across the parkland to the even grander house.

In all probability, the coachman slowed his horses within sight of this imposing residence, where often the sweeping road forked, one arm leading to a gravelled forecourt in front of the house…


…while the other arm continued to the sumptuous, pedimented stable block where my lord’s hunters and carriage horses were cared for in palatial stalls by a dozen or more dedicated grooms.


Carriages no longer draw through the gates of the Berrington Hall gatehouse, but the approach to the house is still a pleasing prospect.


Meanwhile, at Brockhampton House in Herefordshire, the drive is a long, gentle curve to the red-brick Georgian mansion…


…and the path to the fifteenth century Manor House at Lower Brockhampton passes beneath a timber-framed gatehouse over a moat.


At Hanbury Hall, you can see where the formal approach once stretched across the park, between an avenue of Cedar trees.


Many large houses had the parkland landscaped in the current vogue, epitomized by Lancelot ‘Capability’ Brown and Sir Humphrey Repton, to name but two, in order to provide a grand prospect, both for the visitor on arrival and my lord’s appreciation of his estate. At Brockhampton House, the mansion stands on the top of the hill, overlooking 1,700 acres of parkland, including the ‘Lawn Pool’, an ornamental lake created as a landscape feature and for the family’s recreation, now being carefully managed by the National Trust. It is a very fine prospect indeed.


The landscaper’s intention was to take the eye across sweeping parkland dotted with ‘natural’ groupings of trees to some imposing vista or focal point, such as a monument, folly, pavilion or gothic temple. This Wall Pavilion is at Witley Court, although it wasn’t added until the gardens were redesigned by William Nesfield for the Earl of Dudley between 1854 and 1860.

Below is a ruined ‘temple’ on the Stanford Park estate in Worcestershire.


I hope you have enjoyed this little taste of how the Georgian gentry and nobility instilled an air of majesty into their parks and a sense of awe into their guests. Over the coming months I plan to lead you on a tour of the magnificent buildings their aristocratic owners thus displayed ~ a legacy we are so fortunate to have and should enjoy and appreciate in equal measure.

A rip-roaring hip-hip-hoorah for the National Trust, English Heritage and the other wonderful institutions which do such sterling work in preserving these houses for this and future generations!


Unless otherwise stated, all images are the property of the copyright holder and must not be copied, shared or otherwise distributed without the expressed permission of the publisher.

Posted by Heather King Author at 12:29