The carriage draws up in front of the Country House and the visitor alights. The butler opens the door or doors to admit the new arrivals and the first impression of the interior they receive is within the Entrance Hall.


From the Great Halls of medieval times to the formal grandeur of the Georgian mansions, the role of the hall was to welcome the visitor and at the same time be a flag-bearer for the owner’s social standing. The medieval hall had to be large enough to house the lord’s hearth knights, courts of justice, huge gatherings for feast days and bands of travelling minstrels or players. It also had to be lofty enough for the central hearth to give no fear of setting the roof alight. It is from the medieval Great Hall that so many old houses – such as the Elizabethan Hardwick Hall and Palladian Holkham Hall – are thus titled, rather than House or Castle.

On a far smaller scale, built in 1709, the Entrance Hall of Hanbury Hall shows a similar style to Hardwick, with the awe-inspiring addition of James Thornhill paintings on the staircase.

The early Great Halls were usually built with two rows of pillars or posts to support the roof, with an aisle down the centre. Over time these evolved into wide span roofs, braced initially by arches and later by hammerbeam, which projected from the wall below a main rafter. There was a dais at one end, for the lord’s table and doors at the other, leading, via a long corridor to the kitchen, and also to the pantry and buttery. These huge rooms were decorated with tapestries, to help retain heat where wealth permitted, and hung with armaments, coats-of-arms and martial trophies.


By the sixteen hundreds, the upper servants had followed the family’s desertion of the great hall and begun to eat in a separate parlour. The 1st Earl of Dorset commissioned the King’s plasterer, Richard Dungan, to create a flat, decorated ceiling below the timbers of the medieval roof at Knowle. Economic need then brought about more compact houses for the gentry, with the kitchen and a servants’ hall hidden ‘below stairs’. Slowly the entrance hall was changing towards a more Continental usage, as a reception room for visitors awaiting an interview. Built in 1692, the Marble Hall at Petworth (seat of the Duke of Somerset) is an example of this, boasting huge mouldings, elaborate door and window surrounds, and a view through several doors to a classical bust on a plinth in the North Gallery. This ‘axial vista’ was a popular feature during the Baroque period and can also be witnessed at Chatsworth House. Of the same timescale as Petworth, the Painted Hall at Chatsworth (also in Derbyshire) was created for the 1st Duke of Devonshire by William Talman. There were originally two flights of curving stairs where today there is just the one, straight staircase, but with the gallery adjoining it, the hall is possibly even more imposing. Scenes from the life of Julius Caesar by Louis Laguerre adorn the walls above the fireplace facing the entrance and an assembly of the gods, by the same artist, appropriately decorates the ceiling.


Kedleston Hall, also in Derbyshire, boasts a Marble Hall designed by Robert Adam on the lines of a Roman atrium, with columns and classical statuary so it resembles an open courtyard.

Cross-section of the hall and saloon… 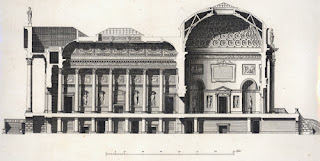 …and Kedleston Hall from the outside. You can see the pediment above the domed ceiling of the hall in the picture above.

At Blenheim Palace in Oxfordshire, an enormous, church-like lantern was erected sixty-seven feet above the hall, its ceiling showing a painting of Marlborough’s battle victory by Sir James Thornhill, completed before he fell foul of the Duchess and was dismissed for suspected sharp practice over his charges. There is a similar, if less grand, arrangement at Berrington Hall in Herefordshire, designed by Henry Holland. Nevertheless, the lantern in the Staircase Hall still takes the visitor’s breath away when first they see it.

At Berrington, the French-influenced Marble Hall leads into the Staircase Hall, as shown by this view through the house.


There are tapestries on the walls, but they date only from 1902. This was a country gentleman’s seat and therefore more modest. Some of the grandest houses of the Georgian era have rococo plaster mouldings in elaborate panels, often in the classical designs of urns, wreaths and garlands. This is a picture of some of the plasterwork at Berrington.


By contrast, this is the entrance hall of Sutton Scarsdale Hall in Derbyshire.

Originally, the Hall was part of a Saxon estate mentioned in the Domesday Book as belonging to Roger de Poitou. Knighted by Henry VIII, John Leke passed the property to his son Francis, who was created a baronet by James I in 1611. He further advanced to the peerage when made Earl of Scarsdale in 1640 by Charles I. The 4th Earl, Nicholas Leke, commissioned Francis Smith to build a Georgian mansion surrounded by gardens, incorporating some of the existing house. Oak panelling and a mahogany staircase were installed; elaborate plasterwork was designed by Italian Francesco Vassalli, and fireplaces were carved in the style of Adam by brothers Adalberto and Guiseppe Artari. When the Earl died, the Hall was sold in 1740, becoming the property of the Marquis of Ormonde through marriage. In 1824, Richard Arkwright Junior, son of Sir Richard, the inventor of the water frame which revolutionized the cotton industry, acquired the estate. In 1805, Robert Arkwright married Frances Crawford Kemble, not only a member of the celebrated acting family but also the niece of Sarah Siddons.

Sadly, as is the case with Witley Court in Worcestershire, the Hall is now a picturesque ruin.

The Entrance Hall at Witley Court looked like this in 1882. The entrance doors are to the right of the photo.

Now it looks like this, but the scale and grandeur of the house are still evident. This shot is also taken towards the grand staircase with the entrance doors behind the camera on the right. The support beams beneath the arches on the right show where the gallery was.


This view shows the Entrance Hall in the other direction and the arched windows of the dining room. A ruin it may be, but Witley Court is an awe-inspiring and inspirational place to visit.

If I have whetted your appetite to visit one of our wonderful stately homes, then I have achieved my aim. The National Trust and English Heritage do a wonderful job of caring for these properties, so if you can, please support them.

Posted by Heather King Author at 15:13