Lemon & Sugar or Something Else?


According to the Oxford English Dictionary, the word pancake comes from late Middle English, a thin, flat cake made of batter, fried in a pan. This suggests the flat batter rounds we still enjoy today were known in the Middle Ages. Further, according to an article in the National Geographic, prehistoric man may well have eaten pancakes. Research suggests, from remains of starchy compounds found on grinding tools from 30,000 years ago, that flour was made from such items as cattails. It further seems possible, from educated guesswork, this flour was mixed with water and baked, perhaps on a hot rock, with or without fat.

“The ancient Greeks and Romans ate pancakes, sweetened with honey; the Elizabethans ate them flavoured with spices, rosewater, sherry, and apples.”

It has long been the tradition in Great Britain to eat several pancakes on Shrove Tuesday, partly to use up foods such as eggs, butter and milk (which would not keep in the days before fridges and freezers!) and partly as a last feast before the fasting decreed by Lent. 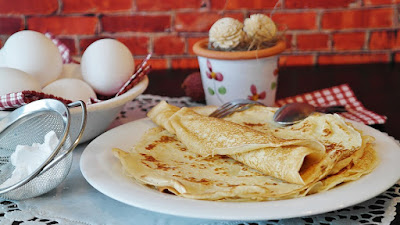 In Georgian and Regency times, pancakes were enjoyed by all members of society, from the royal table, where cream-filled crêpes prepared by His Majesty’s French chef tantalized the guests, to the poor road sweeper filling his stomach on flour and water cakes.

There were a host of instructional tomes written for housewives and domestic cooks by retired chefs and housekeepers. In 1774, Hannah Glasse published The Art of Cookery Made Plain and Easy (Which far exceeds any Thing of the kind yet Published).

To make pancakes
TAKE a quart of milk, heat in six or eight eggs, leaving half the whites out; mix it well till your batter is of a fine thickness. You must observe to mix your flour first with a little milk then' add the rest by degrees; put in two spoonfuls of beaten ginger, a glass of brandy, a little salt; stir all together, make your stew-pan very clean, put in a piece of butter as big as a walnut, then pour in a ladleful of batter, which will make a pancake, moving the pan round that the batter be all over the pan; shake the pan, and when you think that side is enough, toss it; if you can't, tum it cleverly, and when both sides are done, lay it in a dish before the fire, and so do the rest. You must take care they are dry; when you send them to table strew a little sugar over them.

Hannah also gives four recipes (or receipts) ‘To make fine pancakes’. Here are two of them.

TAKE half a pint of cream, half a pint of sack, the yolks of eighteen eggs beat fine, a little salt, half a pound of fine sugar, a little beaten cinnamon, mace, and nutmeg; then put in as much flour as will run thin over the pan, and fry them in fresh butter. -This sort of pancake will not be crisp, but very good.

A quire of paper.
TAKE a pint of cream, six eggs, three spoonfuls of fine flour, three of sack, one of orange-flower water, a little sugar and half a nutmeg grated, half a pound of melted butter almost cold; mingle all well together, and butter the pan for the first pancake; let them run as thin as possible; when they are just coloured they are enough and so do with all the fine pancakes.

To make Wafer Pancakes:
BEAT four eggs well with two spoonfuls of fine flour, and two of cream, one ounce of loaf sugar, beat and sifted, half a nutmeg grated, put a little cold butter in a clean cloth, and rub your pan well with it, pour in your batter and make it as thin as a wafer, fry it only on one side, put them on a dish, and grate sugar betwixt every pancake, and send them hot to the table.

To make Clary Pancakes
BEAT three eggs with three spoonfuls of fine flour, and a little salt, exceeding well, mix them with a pint of milk, and put lard into your pan; when it is hot, pour in your batter as thin as possible, then lay in your clary leaves, and pour a little more batter thin over them, fry them a fine brown, and serve them up.

To make Tansey Pancakes.
BEAT four eggs, and put to them half a pint of cream, four spoonfuls of flour, and two of fine sugar, beat them a quarter of an hour, then put in one spoonful of the juice of tansey, and two of the juice of spinage with a little grated nutmeg, beat all well together, and fry them in fresh butter: garnish them with quarters of Seville oranges, grate double refined sugar over them, and send them up hot.

To make a pink-coloured Pancake.
BOIL a large beet root tender, and beat it fine in a marble mortar, then add the yolks of four eggs, two spoonfuls of flour, and three spoonfuls of good cream, sweeten it to your taste, and grate in half a nutmeg, and put in a glass of brandy; beat them all together half an hour, fry them in butter, and garnish them with green sweetmeats, preserved apricots, or green sprigs of myrtle.—It is a pretty corner dish for either dinner or supper.

Writing in The Art of Cookery in 1802, John Molland had some interesting advice.

Pancakes.
To half a pound of best white flour sifted add a little salt, grated nutmeg, cream or new milk, and mix them well together; then whisk eight eggs, put them to the above, and beat the mixture for ten minutes till perfectly smooth and light, and let it be of a moderate thickness. When the cakes are to be fried, put a little piece of lard or fresh butter in each frying-pan over a regular fire, and when hot put in the mixture, a sufficient quantity just to cover the bottom of each pan, fry them of a nice colour, and serve them up very hot. Serve with them, likewise, some sifted loaf sugar, pounded cinnamon, and Seville orange, on separate plates.
N. B. Before the frying pans are used let them be prepared with a bit of butter put into each and ' burnt; then wipe them very clean with a dry cloth, as this method prevents the batter from sticking to the pan when frying.

In 1811, John Farley, ‘formerly principal cook at the London Tavern’ published The London Cook and Domestic Housekeepers’ Complete Assistant. It is interesting to note that his recipe for Milk Pancakes would appear to be the same as quoted above from Hannah Glasse, almost word for word. He also includes a recipe for A quire of paper. Guess what? Yes, not quite word for word, but today it would be considered plagiarism without a doubt! However, I have included his rice pancakes as I did not include Hannah’s.

Rice Pancakes
TAKE three spoonsful of flour of rice, and a quart of cream; set it on a slow fire, and keep stirring it till as thick as pap: pour into it half a pound of butter and a nutmeg grated: pour it into an earthern pan, and when cold, stir in three or four spoonsful of flour, a little salt, some sugar, and nine eggs well beaten; mix all well together, and fry them nicely. When cream is not to be had, use new milk, and a spoonful more of the flour of rice.

Posted by Heather King Author at 16:28