Tea ~ The Best Drink of the Day

“Tea – the best drink of the day.” Taken from a 1978 advert, this quote echoes this author’s sentiments very nicely. I suspect a large majority of the UK population, and possibly that of America too, fall into one of two camps – tea drinkers or coffee drinkers (unless they are vampires, of course, because Vampires Don’t Drink Coffee!)


As a nation, the English are traditionally tea drinkers. It is as much a part of our heritage as roast beef, sausages (bangers) and mash and apple pie. The Chinese have drunk tea for centuries, so we were comparatively late to cotton on, but now we have… it is frequently the turn-to beverage for all occasions, whether celebratory (where a glass of bubbly is not feasible!), consoling or re-energising. 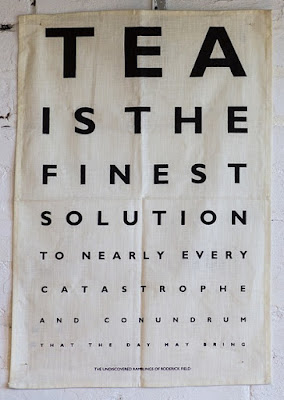 In the sixteenth century, Portuguese traders followed by the Dutch, came across tea in the East Indies. An agent in the East India Company, one ‘Mr. Wickham’ (I am smiling as I type) wrote to an officer of the company, a ‘Mr. Eaton’, asking for ‘a pot of the best Chaw’. (Clarissa Dickson-Wright, A History of English Food). I wonder if this is where the expression ‘char’ comes from, to then be appropriated by those sterling purveyors of our favourite British refreshment, the char lady. Tea was inordinately expensive then and in the reign of James I one pound of leaves was sold for anything from £6-£10, which was a lot of money in those times. By the sixteen-fifties, the healthful properties of Chinese tea ‘…called… by other nations Tay, alias Tee,’ became recognized and was advertised for sale at ‘…the Sultaness Head, a coffee house… by the Royal Exchange, London.’ Meanwhile, at the celebrated Garraway’s Coffee House, situated directly opposite the Exchange in ‘Change Alley, Thomas Garraway, ‘…Tobacconist and Seller and Retailer of tea and coffee…’ was quick to extol the benefits of leaf tea in a pamphlet thought to have been printed in 1660. He stocked various qualities of teas, ranging between sixteen and fifty shillings per pound. (The Mirror of Literature, Amusement and Instruction, 1840.)

Although it would most likely have been plain wood, Thomas Garraway may well have stocked his shop in a manner not dissimilar to this.

Clarissa Dickson-Wright suggests that Catherine of Braganza, wife of Charles II, being familiar with tea in her native Portugal, was instrumental in popularizing our national drink. Clarissa also gives it as her opinion that the custard tarts to be found in Portuguese cafes are of English origin, since London at the time was famous for both custard and custard tarts. However that may be, tea was here to stay.

The first tea, popular in Queen Anne’s reign, was Bohea, a black tea from the Wuiy Hills, Fukien province in China. This term came to mean black teas grown elsewhere. Bohea was generally served in a dish rather than a tea-cup. Originally of the finest quality, it is now considered the lowest. It was soon to be superseded by Hyson tea (a kind of Chinese green tea and the same which was dumped in Boston Harbour).

Due to its popularity, in 1717 Thomas Twining opened a tea-shop for ladies, the first of its kind, since the coffee houses were strictly the domain of the male half of the population. Not to be outdone, Vauxhall Pleasure Gardens opened a tea-garden in 1720. An English institution was truly born and tea drinking became all the rage. Twinings developed the blend of black teas with added oil of bergamot, now known as Earl Grey, and named for Charles Grey, the 2nd Earl, who was Prime Minister from November 1830 to July 1834.

The aristocracy demanded beautiful vessels in which to serve this by-now fashionable drink and that led to the development of the renowned English bone china. Pewter had neither elegance nor refinement enough to suit the wealthy beau monde. Josiah Wedgewood (1730 – 1795) and others began to produce beautiful fine porcelain tea services, as well as novelty items – not much changes, when you think about it. Wedgewood even produced a teapot representing the new modish vegetable, the humble cauliflower. Famous manufactories sprang up, in places such as Derby and Worcester.

To begin with, tea was drunk sweetened and without milk. However, therein began a dilemma which continues to this very day. Fine porcelain cracks under the heat of freshly brewed tea and it is possible this led to the discovery that a little milk poured into the cup first (thus cooling the liquid) reduced this occurrence. When the stronger, less refined teas started appearing in the nineteenth century, the addition of milk became ever more popular. Nevertheless, during Georgian and Regency times, tea was still ridiculously expensive. The duty was astronomical, which led to it being an oft-smuggled commodity along with the (perhaps) more familiar brandy, rum, spices, coffee and silks.

Due to this inordinate cost, China tea was kept in a caddy, locked with a key, so the servants could not either drink it or steal it to sell, although it must be remembered that the sale of used tea leaves was one of the perks. Such items as coffee, tea, sugar and spices were kept in a dry storeroom, usually situated off the housekeeper’s room and under her sole charge. Sugar came in large loaves and had to be cut into cubes or ground with a mortar; this was then kept in a covered bowl in a drawer to prevent spoiling by mice. We really do not know we are born nowadays!

Tea, then, was originally drunk at breakfast or in the drawing room after dinner, when a tray was brought in. This also included coffee and various cakes. Afternoon tea was thought to have been started by Anna, Duchess of Bedford, in the early 1800s. She is said to have been prone to ‘a hollow feeling’ midway through the afternoon. One day, therefore, she invited friends to Woburn Abbey at five o’clock, for a meal which included bread and butter, sandwiches, various sweetmeats and small cakes. Continuing through the summer, the engagement proved so well-attended, on her return to Town she sent out cards for ‘tea and a walking the fields’. Meadows still abounded close to the City in those days. The idea took off, was copied by other hostesses and thus ‘tea time’ was established.

Low or Afternoon tea was traditionally taken by the aristocracy at four o’clock, before the fashionable hour for taking the air in Hyde Park. It consisted of sandwiches with the crusts removed, biscuits and cakes. High tea was more substantial and eaten by those lower down the social scale, between five and six pm. It was more like dinner, with additional bread, scones and cake.