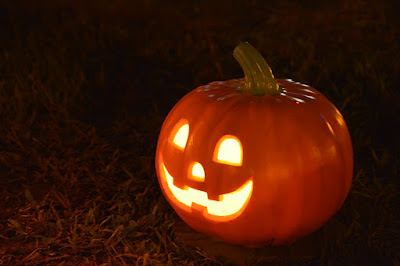 This Hallowe'en seemed a good time to discover which came first, pumpkin pie or apple pie, and whether the latter was really first made by the Americans...


Pumpkin pie of a sort was probably first made by early settlers of Plimoth Plantation in southern New England, the first permanent European settlement, from around 1621. The settlement continued from 1620 to 1692.


It is possible these settlers made stewed pumpkins, or mixed honey, milk and spices into a hollowed pumpkin and then baked it in the hot coals. A modern pumpkin pie consists of a sweetened and spiced pumpkin custard in a pastry case and is traditionally eaten around harvest time in the United States, since it is the symbol of the harvest. It is a staple for Thanksgiving and other special winter occasions.


In the British Isles, pumpkin was made into a pudding. This recipe comes from A New System of Domestic Cookery by A Lady (Maria Rundell), 1814.


Later in the nineteenth century pumpkins in England were stuffed with apples, sugar and spices before being baked whole. Not a pie as we would recognize it now! 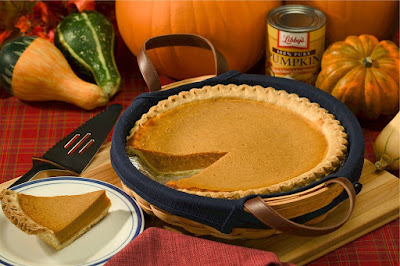 
Yet what of the apple pie?


The first recipe written down for apple pie was printed by Geoffrey Chaucer, in 1381. Aside from apples, it included pears, figs and raisins and was baked in a pastry case. Sugar was expensive and rarely used at the time, so is not listed to go in the 'cofyn' of pastry. Saffron, however, was used to colour the filling. This would have been very different from the apple pie we know and love today! 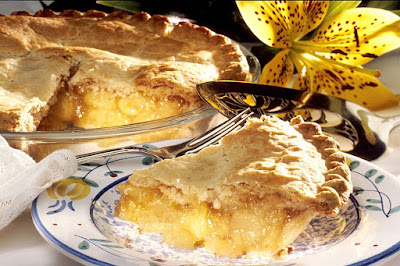 Apples were used for various desserts in Regency England, including puddings, dumplings, Apple Charlotte, tarts and fritters, to name a few. They were also mixed with currants and other fruits. Here are two more recipes from Maria Rundell, for a pudding and a pie.

An Apple Pudding
Boil very tender a handful of small rice in a small
quantity of milk, with a large piece of lemon-peel. Let it
drain; then mix with it a dozen of good-sized apples, boiled
to pulp as dry as possible; add a glass of white wine,
the yolks of five eggs, two ounces of orange and citron cut
thin; make it pretty sweet. Line a mould or basin with a
very good paste; beat the five whites of the eggs to a very
strong froth, and mix with the other ingredients; fill the
mould, and bake it of a fine brown colour. Serve it with
the bottom upward with the following sauce: two glasses
of wine, a spoonful of sugar, the yolks of two eggs, and a
bit of butter as large as a walnut; simmer without boiling,
and pour to and from the saucepan, till of a proper thickness;
and put in the dish.

Apple Pie
Pare and core the fruit, having wiped the outside;
which, with the cores, boil with a little water till it tastes
Well: strain, and put a little sugar, and a bit of bruised
cinnamon, and simmer again. In the mean time place the
apples in a dish, a paste being put round the edge; when
one layer is in, sprinkle half the sugar, and shred lemon peel,
and squeeze some juice, or a glass of cider. If the
apples have lost their spirit, put in the rest of the apples,
sugar, and the liquor that you have boiled. Cover
with paste. You may add some butter when cut, if eaten
hot; or put quince-marmalade, orange-paste or cloves,
to flavour.
Hot Apple Pie—Make with the fruit, sugar, and a
clove, and put a bit of butter in when cut open.

Whatever pie is your choice, have a happy Hallowe'en and 'ware the Witching Hour... You can always stay by the fire with a spiced pumpkin latte! 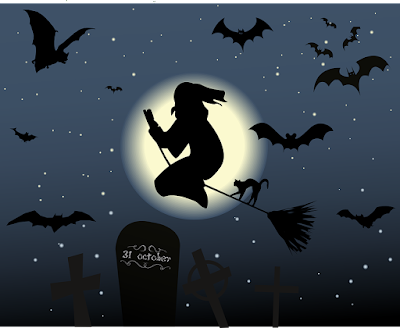 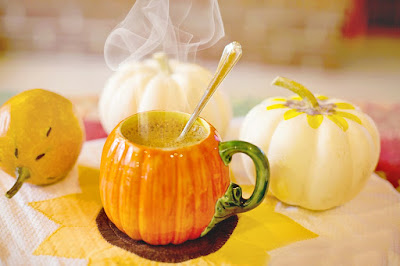 Posted by Heather King Author at 14:21