Accessories ~ A Bit More About Bonnets

In the last decade of the eighteenth century, ladies' hairstyles were extravagant. Wide festoons of ringlets and soft curls were lightly powdered and crowned with wide-brimmed hats which were often fashioned from straw and trimmed with feathers and lengths of ribbon. Gradually coiffures became simpler, ranging from a twist or knot on top of the head - the Apollo knot was popular - to artfully arranged curls framing the face, to the close-cropped look of tiny curls as adopted by Lady Caroline Lamb. These latter were frequently adorned with a ribbon or bandeau; a silver or spangled fillet or a spray of feathers, those of the ostrich being particularly favoured.

Bonnets also evolved, as with the changing trends in hairdressing, more styles became both possible and eagerly sought after. Due to the political upheaval in France, it was dangerous to adopt any fashion which could be linked with the Court or the aristocracy. The outlandish creations worn by Marie Antoinette and Mme de Pompadour gave way to such short styles as a la Titus (also a gentleman's style) or a la victime (the hair brushed up at the back and then coaxed forward in wild disarray to resemble a victim of the guillotine). For the first time in many years, close-fitting turbans and caps were all the rage.

Under Napoleon's leadership, the dour years of Robespierre had once more given way to colour and rich textiles. Luxuriant shades of Pompeian red, blue, green and yellow came to the fore, enlivening the demure white muslin gown with a splash of vibrant colour when made up into redingotes and Spencers.  Bonnets were often fashioned to match such jackets and capes; ladies enjoyed expressing their individuality through creating a new look, by trimming a favourite hat with ribbons, artificial flowers and even fruit.

In June 1799, Jane Austen wrote to her sister Cassandra:
"Flowers are very much worn, and fruit is still more the thing. Eliz: has a bunch of strawberries, and I have seen grapes, cherries, plums and apricots. There are likewise, almonds and raisins, French plums and tamarinds at the grocers, but I have never seen any of them in hats..."

The jockey-style cap, which had made its way east across the English Channel in the 1780s, had originally been adopted from that worn in racing as sporting headwear for country gentlemen. Turned by the French into a fashion accessory for both men and women, it was brought back to England by ladies of the aristocracy, swiftly to become 'all the thing'. Made of silk or satin, the brim stiffened with wire, and embellished with ruched panels, twisted braid and perhaps a tassel or two - or even a feather - it was at once a dainty and elegant finish to an ensemble.


Another style to come out of the Revolution, was the military helmet-inspired casquet a la Minerve, which was first seen in 1797 in an opera, La Caravanne du Caire. Remarkably like an upturned coal-scuttle, it was made of black velvet with three large ostrich plumes curling forwards over the crown, had a white or cream lining and a wide strap fastening beneath the chin. In 1798 Jane Austen wrote to Cassandra of trimming her Mameluke cap, "which was before too nidgetty to please me". Against her sister's advice, she retained "the narrow silver round it, put twice around without any bow, and instead of the black military feather shall put in the coquelicot one, as being smarter; and besides coquelicot is to be all the fashion this winter." Another such type of cap was available in coquelicot velvet in honour of Lord Nelson. The Nelson cap was just one of various items produced in commemoration of his achievements.

Further military-style headgear was much in vogue following the Battle of Waterloo. Masculine apparel had already been adopted into lady's fashion in the form of the Spencer and the severely cut riding habit. Soon this latter item in particular was crowned with a hat similar to the Shako, a peaked cap 'shaped like a truncated cone', adorned with a plume, a ball or even a pompom. They were also trimmed with braid to match frogging on the bodice of a riding habit. The word 'shako' comes from a Magyar word meaning short. The Egyptian influence had already been seen in the early years of the nineteenth century, following the craze for the Oriental. This was, in its turn, superseded by Spanish styles as a result of interest in the Peninsula War, Spanish decoration being added to the gown still considered of classical design. Meanwhile, another eastern influence in hats came in the shape of the turban, particularly popular in Georgette Heyer's novels as the evening headwear of dowagers and matrons. Silk or satin were the fabrics of choice, a portrait from the late 1780s by A.W. Devis, picturing an elegant confection of blue satin picked out in silver, edged with gold and white striped gauze and topped with white ostrich plumes.

Prior to this, introduced at the start of the nineteenth century when 'all things classical' were increasingly becoming popular, the Grecian caul was adopted in the form of the hood. There were many different styles, usually of cloth or netting, which encased the hair in a snood-like fillet.


The poke bonnet, with its instantly recognizable wide, projecting brim, was tied beneath the chin with complementing ribbons. Many a Regency miss liked to tie a coquettish bow to one side or the other, as a genteel expression of her lively personality. Such a hat was often made of straw, especially for informal use, such as a morning stroll. Leghorn straw from Italy had long been the preferred material, but when trade was restricted during the hostilities with France, a method of splitting English straw was developed and thus the home-produced commodity became a worthy substitute. For visiting, afternoon shopping or promenades and evening wear, hats were constructed on wire frames and covered with a variety of fabrics, although silk remained the most favoured for balls and assemblies.

In the years following Waterloo, furbishment both of hats and gowns grew more lavish. Skirts flared more towards the hem, with layers of ruffles, frills, flounces or ribbon and hats were embellished in the same manner. Hemlines lifted above the ankle; gored panels were inserted into skirts; waistlines began to drop towards the natural place and became tighter; sleeves increased in size and extravagance and swags of applique silk flowers stiffened with muslin might well be stitched to an elaborate evening or ball gown. All of these changes led the fashion-conscious lady of the late 1820s inexorably towards the leg-of-mutton sleeve, wide skirts and bustle of the 1830s, along with the outlandishly adorned and somewhat ludicrous hats which went with them. It must have been a daunting sight for a gentleman wishful to steal a kiss! 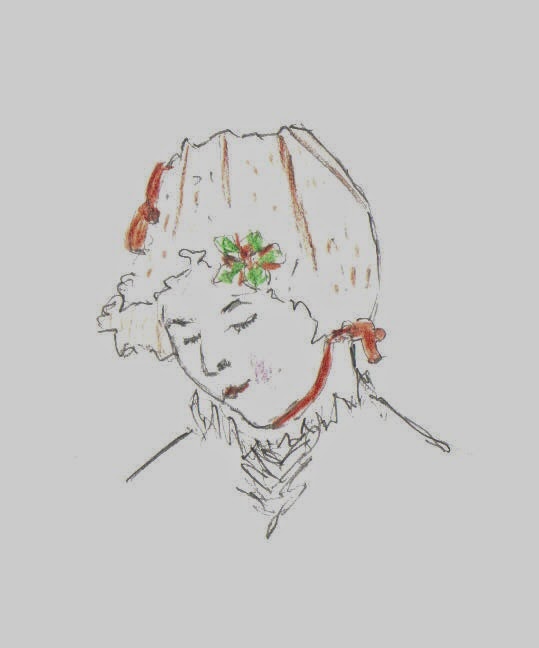 Posted by Heather King Author at 13:43