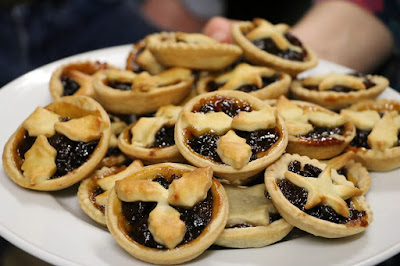 Are you ready for a mince pie? This perennial favourite, you may be astonished to learn (or not), was once actually made with meat. Known in England for centuries, the original combination of beef (or neat’s tongue) and dried fruit has gradually evolved into the individual fruit pies we know today. Here are two recipes from The London Art of Cookery by John Farley, 1811. The first is with meat, the second without.


TAKE a neat's tongue, and boil it two hours; then skin it, and chop it as small as possible. Chop very small three pounds of beef suet, the same quantity of good baking apples, four pounds of currants clean washed, picked, and well dried before the fire, a pound of jar raisins stoned and chopped small, and a pound of powder sugar. Mix them all together with half an ounce of mace, the same quantity of grated nutmeg, a quarter of an ounce of cloves, the same quantity of cinnamon, and a pint of French brandy. Make a rich puff paste, and as the pattypans are filled, put in a little candied citron and orange cut in little pieces. Put close down in a pot what mincemeat is left, and cover it up; but never put any citron or orange to it till wanted for use.


Or, shred three pounds of suet very fine, and chopped as small as possible. Take two pounds of raisins stoned, and chopped as fine as possible; two pounds of currants nicely picked, washed, rubbed, and dried at the fire; half a hundred of fine pippins pared, cored, and chopped small; half a pound of fine sugar pounded fine; a quarter of an ounce of mace, the same quantity of cloves, and two large nutmegs, all beat fine. Put all together into a great pan, and mix them well together with half a pint of brandy, and the same quantity of sack. Put it close down into a stone pan, and it will keep good for months.

No Yorkshire gentleman in Georgian times would have suffered Christmas without this indulgence. It was a good way of showing prosperity. The pie was made from whatever birds were available on the estate and comprised a three to five bird roast which was then encased in pastry. A common combination was chicken, pheasant and pigeon, all of which were boned and then stuffed inside each other. Particularly in Yorkshire, this was often given as a gift.

A more elaborate version of this dish caused the great bustard to be driven to extinction in Britain by the 1840s. Great bustards were prized for their flavour and cost about two guineas each in the first years of the nineteenth century. French chef Grimod de la Reyniere included in his book of that time, L’Almanach des Gourmands, a now famous recipe incorporating the bustard. It began with an olive stuffed with capers and anchovies, which was pushed into a garden warbler. This was then put into an ortolan, followed by a lark, a thrush, a quail, a larded lapwing, a plover, a red-legged partridge, a woodcock, a teal, a guinea fowl, a duck, a fattened pullet, a pheasant, a turkey and finally the bustard, each time the whole being placed into the larger bird. The stuffed bustard was then cooked in a sealed pot with ham, carrots, onions, celery, herbs, spices and lard for twenty-four hours. It was the kind of dish which would have graced one of the Prince Regent’s grand banquets.

In Carpet of Snowdrops, Joscelin brings a Christmas Pie for Eloise and Goody. Goody is somewhat tickled:


“Christmas joy to you, too, Goody. I have a gift for you as well.” Joscelin handed over the basket.
As Goody removed the blue and white cloth, a small gasp escaped her.
“Christmas Pie, what a treat! Thank you.”
“I had my cook prepare it for you this morning.”
Eloise screwed up her nose at the large domed pie. It had golden pastry decorated with crimped edges and elaborate pastry leaves and berries.
“What is in it?”
“Pigeon, chicken and pheasant, each bird being used to stuff the next in size,” Joscelin answered.
“My mouth is watering already,” Goody put in with a smile. “If you have no objection, my lord, step into the kitchen. I have some mulled wine heating.”
“I will be there directly. There is one more gift for you both. I will fetch it in.”
He went back outside, returning almost immediately with a small fir tree.
“Whatever have you brought that in for?” Goody demanded, reappearing with a steaming glass in her hand.
“I spent some time in a Prussian camp after Waterloo,” he explained. “It is a tradition in Prussia to bring a tree into the house and hang decorations on it. I also read somewhere that Queen Charlotte caused one to be put up at a children’s party a few years ago.”
“What a delightful idea!”

Here is a recipe from the time:

HAVING made a good standing crust, with the wall and bottom very thick, take and

bone a turkey, a goose, a fowl, a partridge, and a pigeon. Season them well, and
take half an ounce of mace, the same quantity of nutmegs, a quarter of an ounce of
cloves, and half an ounce of black pepper, all beat fine together. Then add two large
spoonsful of salt: mix all well together. Open the fowls all down the back, and bone,
first the pigeon, then the partridge, and cover them. Then proceed in the same manner
with the fowl, goose, and turkey, which must be large. Season them all well, and then
lay them in the crust, so that it may look only like a whole turkey. Then have a hare
ready
cased, and wiped with a clean cloth. Disjoint the hare into pieces, season it, and lay it as close as possible on one side; and
on the other side put woodcocks, moor-game, and any sort of wild fowl. Season them well,
and lay them close. Put at least four pounds of butter into the pie, and then lay on the lid,
which must be very thick, and let it be well baked. It must have a very hot oven, and will
take four hours baking at least. This crust will take a bushel of flour.

No Christmas is complete without cake. The forerunner of the present day Christmas
Cake, this was first known as plum porridge and dates back to the beginning of
Christianity. The porridge evolved into a cake long before the sixteenth century.
three quarters of a pound of currants washed and well picked; stone and slice half a
pound of raisins, eighteen ounces of sugar beat and sifted, and fourteen eggs, leaving
out half the whites; shred the peel of a large lemon exceeding fine, three ounces of
candied orange, the; same of lemon, a tea spoonful of beaten mace, half a nutmeg
grated, a tea-cupful of brandy, or white wine, and four spoonsful of orange flower.
First work the butter with the hand to a cream, then beat the sugar well in, whisk the
eggs for half an hour, then mix them with the sugar and butter, and put in the flour
and spices. The whole will take an hour and a half beating. When the oven is ready,
mix in lightly the brandy, fruit, and sweetmeats, then put it into the hoop, and bake it
two hours and a half.

This cake, based on a traditional recipe, uses approximately half a pound of each ingredient and is far less complicated than the Regency receipt quoted above.

Whatever you are eating this Yuletide, I wish you a joyful and peaceful Christmas, and Best Wishes for the New Year.


Apologies for formatting ~ having issues correcting.

Posted by Heather King Author at 06:02